endell C. Rudacille has been involved in Law Enforcement since 1968 when he entered Military Police School at Fort Gordon, Georgia. Since that time he was an agent in the U.S. Army Criminal Investigation Division, a Special Agent and Senior Polygraph Examiner for the Department of Defense and a retired Detective First Class from the Howard County, MD Police Department. Currently the President of ID-LIES, LLC, Wendell is the author of “Identifying Lies In Disguise”, a critically acclaimed text on reading deceptive behavior and speech. Published in 1993, his book now in its 7th printing, has received praise from readers and has been featured in numerous classroom courses throughout the country. 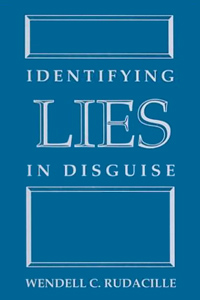 Readers and students alike have complimented his efforts with statements such as:

Wendell has also penned numerous articles published in state law enforcement journals, and conducted nation-wide Seminars on Verbal Based Investigative Interviewing and Forensic Statement Analysis. He has conducted over 8,000 polygraph examinations since 1987 for the Department of Defense, Howard County Police Department, attorneys, businesses, and private citizens.

Wendell served in the U.S. Army Military Police and Criminal Investigation Division beginning in 1968 and is a Vietnam Veteran having served with the 9th Combat MP Company, 9th Infantry Division, Dong Tam, RVN (1968-1969). He received an honorable discharge in 1971.